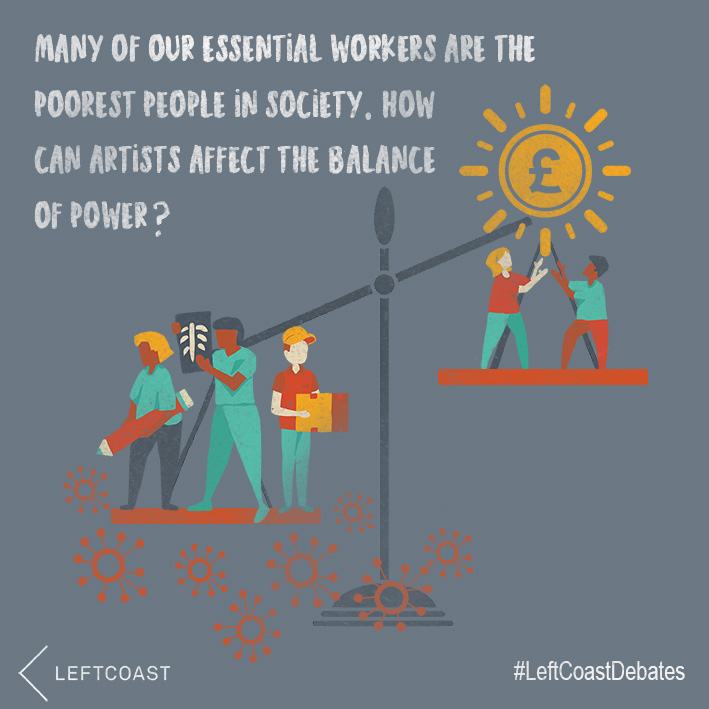 How do we feel about the fact that many of our essential workers are the poorest people in UK society? And the working-class will be forced to work harder following the pandemic? How can artists affect change at this time?

Emily Maitlis’ monologue at the beginning of newsnight lit up twitter last week, resonating with so many, as one twitter user commented:

The most moving @BBCNewsnight programme I have ever seen. From poorly paid key workers to children at risk to selfless individuals who’ve died from Corvid-19, doing their best for others. BOY does society need to change to reflect ‘true worth’ & not just the richest!

People felt angry, not only because the lowest paid  and underprivileged in our society have the burden of keeping our country moving and safe, but because it is over a month into this crisis and this is the first time it had been acknowledged with any real truth on a national platform.

Sections of our national press are failing to report the truth, choosing to ignore that even in a crisis that allegedly effects everyone without discrimination the glaring inequalities of our society are exposed more than ever before.

Marcus Moore, a former journalist for the BBC wrote about the relationship between broadcaster and the government:

Not only can they dictate what information is made available to the public, but also the manner in which it is presented. You don’t need to read many pages of that book by George Orwell to grasp how easy it is to control the populace once you have control of the means of communication.

As artists we have the freedom and the ability to express truth in a way that influences people and changes attitudes for the better.

We must be compelled to challenge our societies, to affect the balance of power and be moved to hold government accountable for their policies.

The crisis has shown the continuing dependence of society on the working class, people who are putting their health and wellbeing at risk to keep our country moving, in most cases don’t have the privilege of choice.

An estimated 14.3 million people are in poverty in the UK. Working-age people in poverty are increasingly likely to be in working families. Employment is not freedom.

They work the bottom rung jobs that require a physical presence. Not only the lowest paid, but in the lowest position in terms of power, influence, and respect. They are our bus drivers, warehouse workers, cashiers, delivery distributers and our carers.

We are fully aware of our privilege to self-isolate and work from home. But as artists we cannot sit back and watch the continued exploitation of our workers who do not have that option.

Signs indicate that the road ahead may get even tougher for our working class. There are calls from many sides to ensure redistribution of wealth, an introduction of universal income and develop a more balanced society. One that is more effective than our current taxation system.

The focus is to “get the economic machine running to reproduce mass wealth, to try to erase, as of 2021, the loss of growth of 2020”.

“The creation of wealth will allow for an increase in the tax base, and therefore revenue, which will reimburse the debt accumulated during the crisis.”

As our government is set to borrow £273 billion, our taxation will be used to pay back the debt, which marks a massive reduction on social spend.

Our redistribution tax policy creates a divide within society because we are led to believe that those who work hard will earn rewards from their work.

We know that this is not always true, we know that there is not a direct correlation between hard work and income and power, yet our economy and society is based on this belief.

It is a belief that says, our poor are lazy and our rich have made it out of hard work and determination alone.

We need to recognise inherited inequality and look to an alternative platform for wealth redistribution, which can heal divides and create a fairer society.

“Predistribution of wealth” is the idea that the government should try to prevent inequalities occurring in the first place rather than through the tax and benefits system once they have occurred.

Many artists will be counted with in the 14.3 million, and suffering hardship at this time. Being ineligible for the government self-employed fund and Arts Council individual grants. Funds which state an individual should earn 50% of their income from self-employment or funded projects. Many working part-time within the leisure and retail industry, have seen job losses with no option for furlough funds.

Artists have spoken of a creative paralysis, burdened with the stresses that the pandemic generates.

We urge you to express and document your own truths on the current situation.

At a time when many are feeling overwhelmed, art can transform and elevate ideas into a shared experience, one which has the power to transcend the polarising populism.

Artists – take action, create and share, you hold the power for change!

We are NOT trying to find the ‘bright side’ of this crisis, there is no clear way to make sense of a global pandemic. But we want to help to make sure that should this happen again, the people and communities that have suffered the most are more resilient to its effects.

We deliver work along the Fylde Coast, but are interested in hearing from people living in different areas too. Join the debate –@LeftCoastUK #LeftCoastDebates 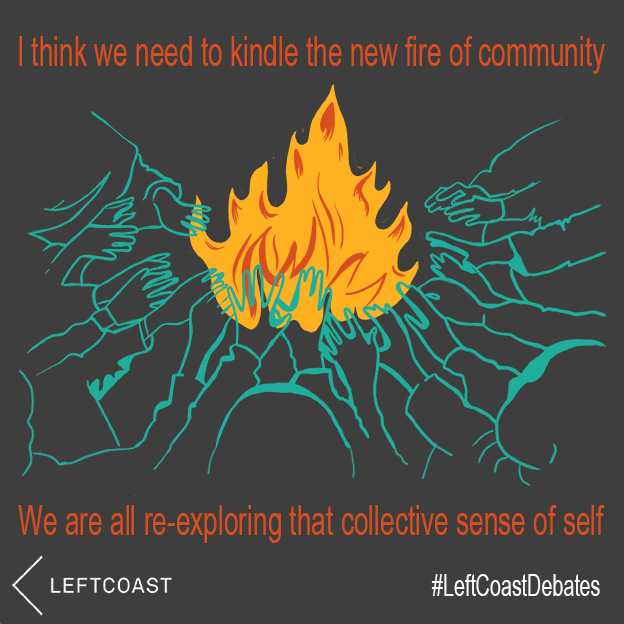 I suspect we feel about it the exact same way that every society has ever felt about it. Status and social stratification are clearly powerful human instincts. Let’s not get carried away. (Whilst hoping for a rebalancing).

‘we know that there is not a direct correlation between hard work and income and power, yet our economy and society is based on this belief.’

But it shouldn’t be #LeftCoastDebates

It already started with people having to think differently and see the world from a different perspective, fingers crossed that it continues when this crisis ends and we get more creativity and originality and people at least try different ideas and not worry about just an image

It’s about our society supporting the artists, musicians, shops and trying to shift big industries hold on things.. if everybody does a little bit, things will change. we need to support the big society, this is the perfect time for expression

I’m hoping that all this time people have got will make them see what’s important and spend time doing the constructive things to support the arts.. it’s just the funding that’s always a problem isn’t it

It’s good if there’s a trickle down effect, as artists get bigger (not just richer) if they can keep in touch with and support newer artists coming through. Try and build up a network but it’s really hard over the last ten years or so.

I think it’s important that artists challenge the power imbalance and inequality that essential workers face. Creative capture the important job role they do, bringing their story to life.  #LeftCoastDebates

It’s really highlighted that the jobs that are essential to keeping us alive and well, physically and mentally are the ones that are completely taken for granted. A lot of the time people do them because they want to make a difference and this good will is completely exploited.

Perhaps these times are allowing personal reflection on what’s important – bringing people back to community and turning away from more superficial aspects of life…..