Around the time we returned to school after the 1986 summer holidays, a supply of fluorescent Nike windcheaters and Adidas Samba trainers arrived in the Bewise shop on our estate’s shopping precinct. It seemed as though we’d been suddenly furnished with the materials to live the dream overnight. The label gods had bestowed their bounteous overstock on us, the covetous mortals of outer Birmingham, and now we could look as cool as we were told we ought to look.

My Nike windcheater was orange and black, my Sambas black with white stripes. I remember how much they cost: the Nike £9.99, the Adidas, £12.99. Expensive for my mum and other mums like her, but not out of reach like the £40 and £50 numbers on sale in town. My grey school trousers were from BHS, but customised at home with a tiny orange-and-black ‘F’ motif which I glued on to the back pocket, in imitation of the Farah slacks which were all the rage among boys who watched golf on the telly.

It felt like a huge achievement to get the whole outfit on point: an act of mastery, even. If premium sports labels were codes – symbols of having reached an acceptable level of affluence and status – they were there to be cracked. We grew up believing that the best way to show that you dreamed of escape, that you wanted something better than what you were being offered, was to show how “aspirational” you were, and the idea of wearing homemade clothes felt like the antithesis of that. 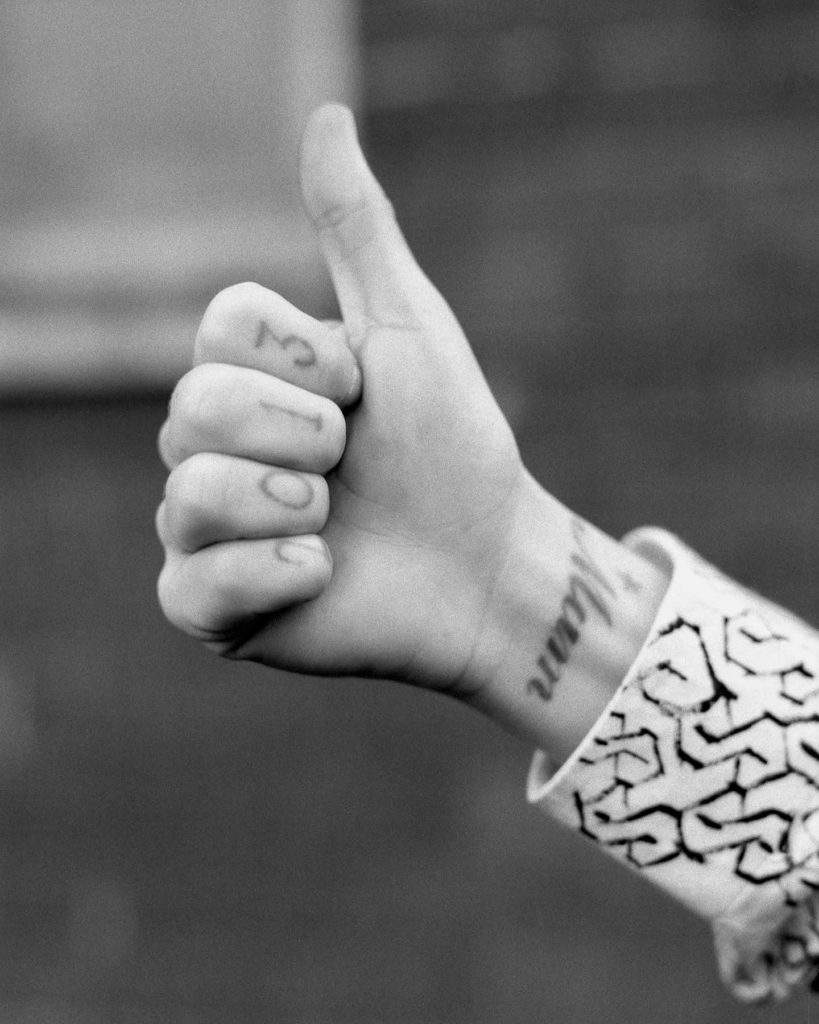 It wouldn’t be a sign of how creative you were, but of how you couldn’t afford the ‘real’ stuff. Worse, even, than wearing Hi-Tec trainers. The enraging thing about this was that our own parents – our mothers and grandmothers – had to make their own clothes if they wanted look aspirational. They would go to the market, buy the best material they could afford and the swishiest patterns they could find and make themselves look like millionaires: as if about to go to the Oscars, not to the gym.

The coveting of sportswear, particularly in working-class areas where more discreet expressions of status can be hard to come by, developed out of the sharp-dressed football casuals scene and the emergence of hip-hop culture, both in the early 1980s. Adidas-wearing casuals became Adidas-wearing B-boys overnight, turning up at our primary school gates with a roll of lino, chucking it over the fence before laying it out and displaying their newfound talent for breakdancing on our playground.

Their creative use of time, space and discarded lino suggested a positive response to the boredom that so often manifested – on peripheral estates like ours, too far from the city to be part of its urbanity – in trashing stuff and picking on people. In an essay on the German cultural critic Walter Benjamin, the Liverpool author Joe Moran makes reference to the ‘productive type of boredom which provides access to… revolutionary possibilities’, far more so than the fashionable ennui displayed by city-dwellers who’ve seen everything and can longer by surprised by anything.

Well into my teens I bought into the idea that I was only worth the labels I sought out, but in the early 1990s another bunch of working-class originals, the Manic Street Preachers, expanded my world beyond Nike worship by branding old white shirts with their own insurgent slogans: ‘DESTROY WORK’, ‘BABY I’M BORED’, ‘MY MIND IS A LETHAL WEAPON’. I took them on board as readily as the subtler message that all I really needed in life is a wardrobe full of tracksuits.

35 years later, sports labels are so entrenched in the visual lexicon of working-class fashion that the two are synonymous. Alongside the slot machine shops and BrightHouse, where the tellies are unignorable and the price tags invisible, the same estate shopping precinct where I got my Nike from Bewise now has branches of Sports Direct and JD Sports. Outrageous scammers of differing kinds, all persuading people without much money a chance to live as though they have lots.

As if by design, that has been the political and economic theme of, again, the last 35 years: we will take your jobs making and fixing things and replace them – if you’re lucky – with ones selling and promoting things. We’ve noticed you like to dress well and look good: how about we take your ideas and make a fortune selling them back to you? Don’t think you can make things of your own when we have things to sell you, and don’t think you can get away without buying them just because you don’t have the money. We’ll give you credit instead, and make a mint off that as well.

That’s not the whole story: to suggest that working-class people are ‘sold to’, and that they don’t know what they’re getting themselves into, is to fall into the classic anti-consumerist trap of believing that shopping – to enjoy buying and having material things – is a sort of character defect remedied by education. If only the proles could look after themselves, then we wouldn’t have to go around insisting they need help!

There has to be another way. People will always need clothes, both as a material necessity and as a crucial form of self-expression. In that sense fashion can be as much a part of the foundational economy – a way of doing economics that places greatest value on the fulfilment of everyday needs, rather than concocted desires – as groceries and health care. To that end, Front Door is a new streetwear brand that has a clear aim: to reclaim working-class creativity for working-class people.

With that creativity comes ownership, originality and, hopefully, a source of income that won’t immediately be siphoned offshore. Imagining the ‘revolutionary possibilities’ of starting a fashion label out of a council house in Fleetwood, the artist Ocean Farini and her collaborators have seized the chance to make something for, of, and by themselves. Who says fashion has to come with someone else’s label – why not design your own?

Lynsey Hanley was born in Birmingham and lives in Liverpool. She is the author of Estates : An Intimate History, and Respectable: The Experience of Class. She is a regular contributor to the Guardian and the New Statesman.