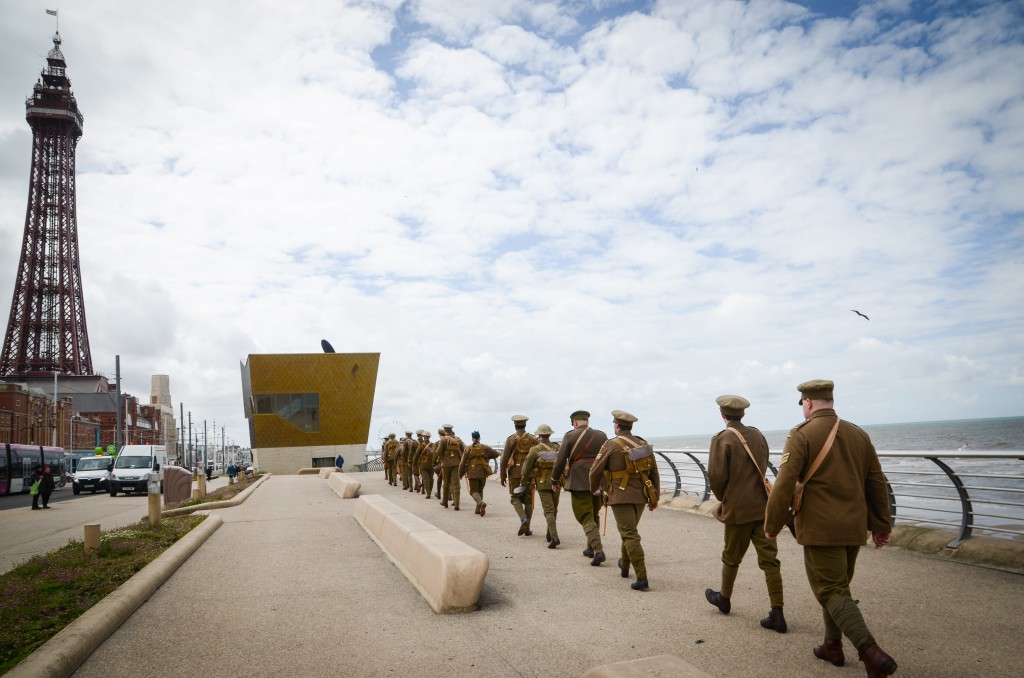 LeftCoast takes part in 14-18 NOW?s UK-wide work by Jeremy Deller to commemorate the centenary of the Somme

LeftCoast are proud to be part of a project that involved hundreds of volunteers in the North West. Led by the ROYAL EXCHANGE THEATRE, partner organisations LeftCoast (Blackpool), Bolton Octagon, Oldham Coliseum and Storyhouse (Chester) were part of a UK-wide event that took place today, 1 July 2016, as a modern memorial to mark the centenary of the Battle of the Somme. Commissioned by 14-18 NOW, the UK?s arts programme for the First World War centenary, the work was conceived and created by Turner Prize-winning artist Jeremy Deller in collaboration with Rufus Norris, Director of the National Theatre.

All photographs used in this article were taken by CJ Griffiths Photography. 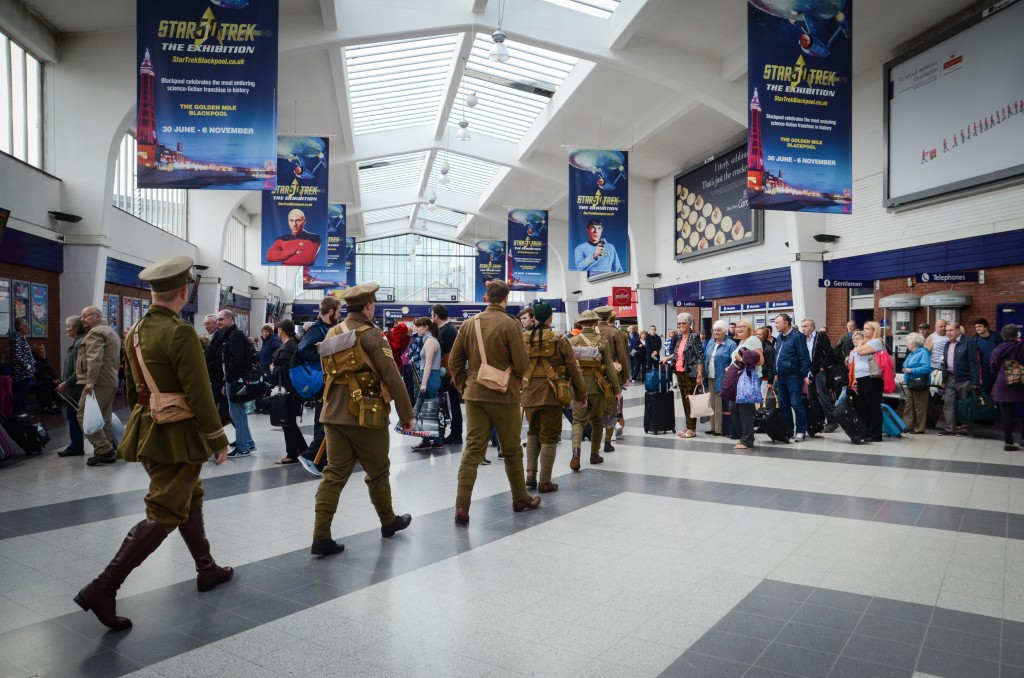 The specially commissioned event saw around 1500 voluntary participants dressed in First World War uniform appear unexpectedly in locations across the UK. The Royal Exchange was one of 27 organisations which collaborated on the work, called ?we?re here because we?re here?. It was produced by Birmingham Repertory Theatre and the National Theatre, working in close collaboration with partners including:?Lyric Theatre Belfast,?National Theatre of Scotland, National Theatre Wales,?Northern Stage,?Playhouse Derry-Londonderry, Salisbury Playhouse,?Sheffield Theatres and?Theatre Royal Plymouth.

The participants who walked the streets today were a reminder of the 19,240 men who were killed on 1 July 1916, the first day of the Battle of the Somme.? Each participant represented an individual soldier who was killed that day. The work is partly inspired by tales of sightings during and after the First World War by people who believed they had seen a dead loved one. 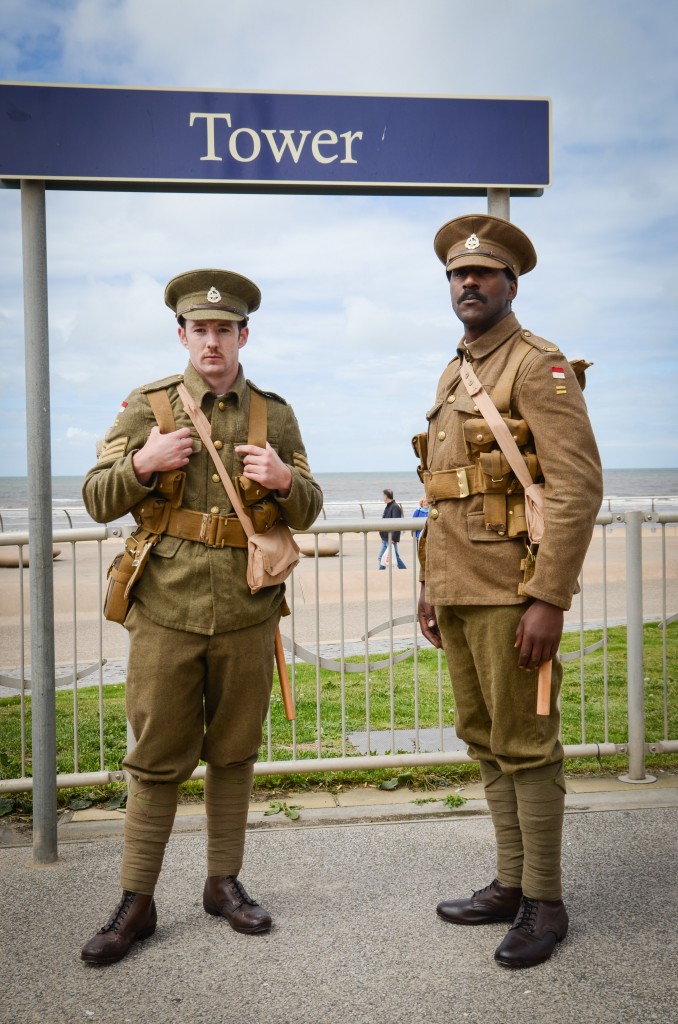 The participants wore historically accurate uniforms, representing 15 of the regiments that suffered losses in the first day of the Battle. The soldiers did not speak, but at points throughout the day would sing the song ?we?re here because we?re here?, which was sung in the trenches during the First World War.?They handed out cards to members of the public with the name and regiment of the soldier they represented, and, where known, the age of the soldier when he died on 1 July 1916.

The daylong work ran from 7am to 7pm and covered the width and breadth of the UK, from Shetland to Penzance.? Sites they visited included shopping centres, train stations, beaches, car parks and high streets ? taking the memorial to contemporary Britain and bringing an intervention into people?s daily lives where it was least expected.

The volunteers were men aged between 16-52, reflecting the men who would have fought in the Somme. They were not trained actors but come from a range of professions, including a sheep farmer, flight attendant, doctor, lawyer, social worker, shop?assistant, portrait artist and GCSE student. They came together to rehearse in theatres across the UK over a month-long period in the run-up to the performance.? ?we?re here because we?re here? is one of the largest arts participation projects ever staged in the UK, with hundreds of additional volunteers working behind the scenes. 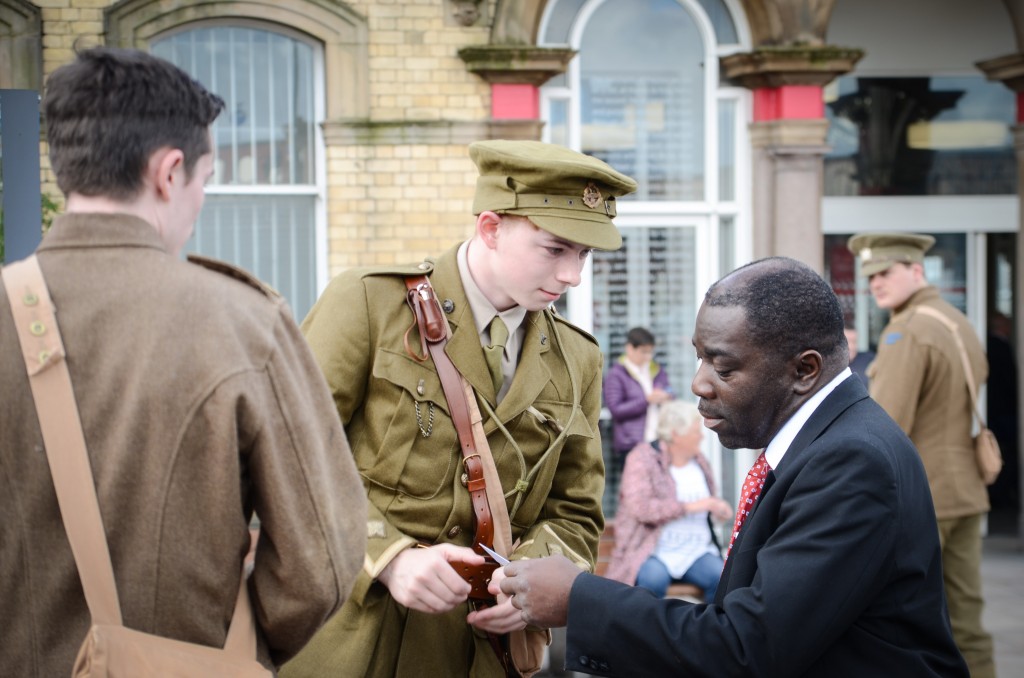 “I wanted to make a contemporary memorial to mark the centenary of the Battle of the Somme, one that moved around the UK with an unpredictability in which the participants took the work directly to the public.?

?This work by Jeremy Deller is a truly national piece of theatre and is a powerful way to remember the men who went off to fight 100 years ago. I also hope it will serve as a catalyst to strengthen ties with theatres and communities across the UK.?

“1 July 1916 saw 57,470 casualties on the first day of the Battle of the Somme, of whom nearly 20,000 died: it was the bloodiest day in British military history. Taking part in ‘we’re here because we’re here’ has given hundreds of young people across the UK the chance to find out more about the Somme, and in some cases discover the stories of family members who fought in the war.? Working alongside brilliant artists, directors and theatres on this astonishing project will be an experience they will never forget.”

?When I was asked if the Exchange wanted to be involved in this project the answer was easy ? Yes. Jeremy Deller has created a powerful and provocative performance which the whole of the UK can experience together in a single day. It has been an incredible opportunity for our participants and an extraordinary way for them to find out more about the Somme and to share it with people across the whole of the North West. It has also been a great way to cement relationships with arts organisations across the country.?

?LeftCoast is delighted to have been a part of ‘we’re here because we’re here’ working with Jeremy Deller and some of the country?s leading arts organisations.? It has been a totally unique opportunity for men in Blackpool to have been involved in this living memorial ? their generosity and commitment to this project has been outstanding? 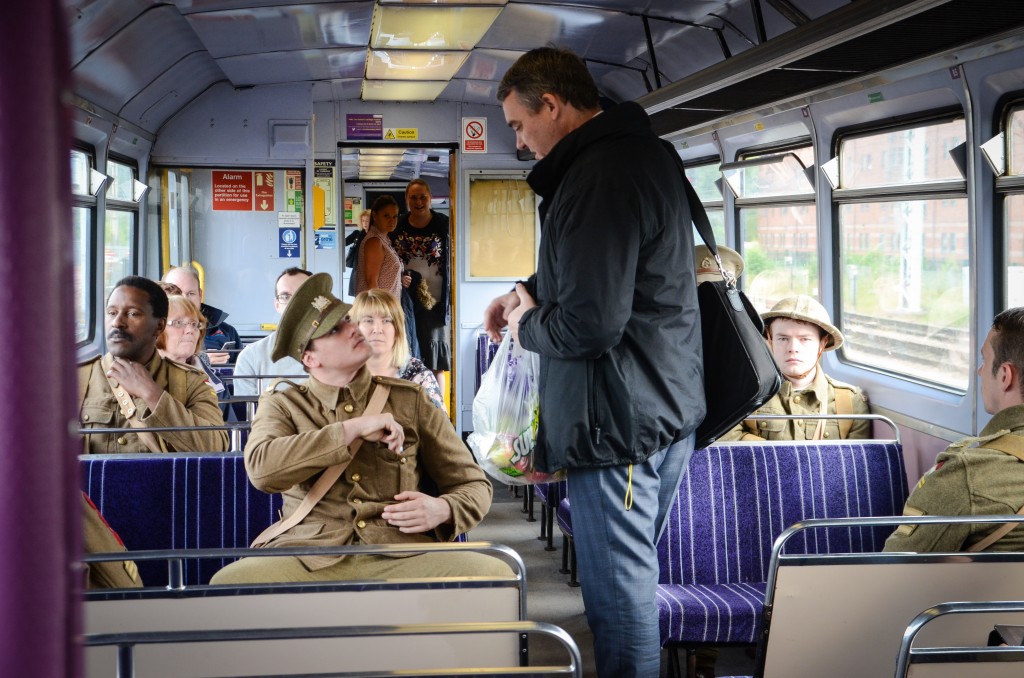 ?we?re here because we?re here? was made possible by an Ambition for Excellence Award from Arts Council England, with additional support from Paul Hamlyn Foundation, Creative Scotland and Art Fund. 14-18 NOW is principally funded by the National Lottery through the Heritage Lottery Fund and Arts Council England, and by the Department for Culture, Media and Sport

‘we’re here because we’re here’ was commissioned by 14-18 NOW, and?conceived and created by Turner Prize-winning artist Jeremy Deller in collaboration with Rufus Norris, Director of the National Theatre. It was produced by Birmingham Repertory Theatre and the National Theatre with?the?following partners:

14-18 NOW is a programme of extraordinary arts experiences connecting people with the First World War, as part of the UK?s official centenary commemorations. It aims to engage as many people as possible with the First World War, exploring how the war has impacted on the society we live in now. 14-18 NOW commissions new work by leading contemporary artists from all art forms, inspired by the period 1914-1918.? The commemorative period is marked by three key seasons – the first season centred around 4 August 2014 (Anniversary of the Declaration of War), the second is March to November 2016 (anniversary of the Battle of Jutland and the Battle of the Somme) and the last in 2018 (centenary of Armistice Day). 14-18 NOW is responsible for the UK tour of the iconic poppy sculptures by artist Paul Cummins and designer Tom Piper. 14 -18 NOW is supported by the National Lottery through the Heritage Lottery Fund and Arts Council England, by the Department for Culture, Media and Sport, and by additional fundraising.? 14-18 NOW has commissioned over 80 artworks to date that have been seen by over 20 million people.

Birmingham Repertory Theatre is one of Britain?s leading producing theatres. Founded in 1913 by Sir Barry Jackson, Birmingham Repertory Theatre Company rapidly became one of the most famous and exciting theatre companies in the country launching the careers of an array of many great British actors including Laurence Olivier, Ralph Richardson, Edith Evans, Paul Scofield, Derek Jacobi, Elizabeth Spriggs, Albert Finney and many more.? In 2013 the company celebrated its centenary.

The REP?s aim is to inspire a lifelong love of theatre in the diverse communities of Birmingham and beyond.? As well as presenting over 60 productions on its three stages every year, the theatre tours its productions nationally and internationally, showcasing theatre made in Birmingham. The commissioning and production of new work lies at the core of The REP?s programme and over the last 15 years the company has produced more than 130 new plays. The theatre?s learning and participation programme is the best of any cultural organisation in the city and in the past year The REP has engaged with 4500 young people and 2600 adults through its learning and participation programme equating to 30,000 individual educational sessions. The REP is also committed to nurturing new talent through its youth theatre groups, The Young REP, its professional artist development scheme, REP Foundry, plus a new initiative, FURNACE which offers local people opportunities to develop new talents.

Thanks to National Lottery players, we invest money to help people across the UK explore, enjoy and protect the heritage they care about – from the archaeology under our feet to the historic parks and buildings we love, from precious memories and collections to rare wildlife.

Arts Council England champions, develops and invests in artistic and cultural experiences that enrich people?s lives. We support a range of activities across the arts, museums and libraries ? from theatre to digital art, reading to dance, music to literature, and crafts to collections. Great art and culture inspires us, brings us together and teaches us about ourselves and the world around us. In short, it makes life better. Between 2015 and 2018, we are investing ?1.1 billion of public money from government and an estimated ?700 million from the National Lottery to help create these experiences for as many people as possible across the country. www.artscouncil.org.uk

Paul Hamlyn Foundation was established by Paul Hamlyn in 1987. Upon his death in 2001, he left most of his estate to the Foundation, creating one of the largest independent grant-making foundations in the UK. Our mission is to help people overcome disadvantage and lack of opportunity, so that they can realise their potential and enjoy fulfilling and creative lives. We have a particular interest in supporting young people and a strong belief in the importance of the arts in helping us address this mission.

Creative Scotland is the public body that supports the arts, screen and creative industries across all parts of Scotland on behalf of everyone who lives, works or visits here.? We enable people and organisations to work in and experience the arts, screen and creative industries in Scotland by helping others to develop great ideas and bring them to life.? We distribute funding provided by the Scottish Government and the National Lottery. For further information about Creative Scotland please visit www.creativescotland.com.

Art Fund is the national fundraising charity for art. In the past five years alone Art Fund has given ?34 million to help museums and galleries acquire works of art. It also helps museums share their collections with wider audiences by supporting a range of tours and exhibitions, and makes additional grants to support the training and professional development of curators.?Art Fund has awarded a grant to support the legacy of the extraordinary and important project we?re here because we?re here. This support is in addition to other work with 1418NOW, including funding for a forthcoming commission by Christine Borland for Glasgow Museums.